My Time as a Guide on Skellig Michael

I lived and worked here. On this austere Atlantic rock. Hard though that may be to believe. People gape at me and ask me did I live in a beehive hut? I laugh and say no. It was primitive but not that primitive. At least that’s what they say now. Twenty years ago they said ‘you work where exactly?’ Not knowing the location of Skellig Michael let alone that there is a monastic settlement on it.

Stars Wars has wiped away any vestige of anonymity Skellig once had. Now it’s Silver Screen Skellig. Lucas Productions Skellig. Star Wars Skellig. And that’s a good and a bad thing in not so equal measure. I believe it’s a good thing because Skellig Michael is a wonder.

It’s a natural masterpiece with a man-made miracle on top. How they carved that site into the cliff face or located that garden so it faced south or built those steps to the top or climbed so high to construct the hermitage on the south face – all these things make you wonder. That real sort of wonder we’ve all forgotten how to practice. The sort of wonder that comes from scuba diving on the Barrier Reef or climbing Kilimanjaro or seeing an African elephant charging across the African plains – real, physical experiences that remind you that humanity is only passing through this planet. But Skellig is right here, on Ireland’s doorstep. No need to fly around the world. Just drive to Kerry. And then a bit further. And then take a boat. And possibly feel a bit sick on the journey but you’ll forget that. I promise.

I took that boat every three weeks for four months and the sea sickness is not my most abiding memory. I do recall not looking forward to the boat journey out or back and praying for calm seas but then the memory fades.

The ones that remain crystal clear are of trying to master ‘walker-talkie’ speech because that’s how we communicated with each other from the top of the rock to the bottom or from the island to the mainland. ‘Over and out.’ Over and over again, hour after hour, day after day. It was a time when mobile phones were still made by Nokia and the phone network was in its infancy. But, like a premonition of the prevalence of mobile technology that was to come, if you went right to the end of the pier where the tourist boats landed and stood on something – a rock or a crate, anything to elevate you – you got phone reception and could call home without having to say over and out.

It was an experience in communal living too, shared spaces, facilities and there was no running water. There was a solar powered toilet but the sun doesn’t shine often on Skellig. And no showers. Others boiled water in basins and washed. I swam in the sea. Every single day. Rain or shine. No hairdryers, no tv, no technology. Simple living. Eating when the sun came up and when it went down. Following natural, circadian rhythms. Catching fish in the sea perched on the rocks with a fishing line. Cooking by gaslight on a gas ring. Reading. Talking. Singing. Praying.

To sit in the monastery alone at any time of day or night was a privilege. It’s so contained, it gave you a feeling of safety and protection even though you knew you were hanging off the side of a very high rock.

My name is Michelle and the rock is dedicated to St Michael. Michelle as a name is a feminised version of Michael so I’ve always felt an affinity to this saint. I’ve been to Mount St Michael in Cornwall and Mont St Michel in France. He’s the patron saint of high places. Skellig Michael completed the trilogy.

The Office Of Public Works

The OPW came to excavate the monastery. We found pottery buried in the soil. They came to count the birds and stayed overnight and up all night to count the night birds. The ones who nest all day and only stick their tiny beaks out after sundown. They tagged the puffins so they could make lists of statistics. These visits were company too. New faces, news from the mainland.

The visitors were more fleeting. Too busy climbing or eating or photographing to talk. They would listen to us speak about the island and then move on. They assumed we went back every day on the boat like they did. Or maybe they just thought we were crazy. Maybe we were.

Certainly I was young. And I was used to having my stuff around like a hairdryer. Or chocolate. Or hot water. Or fluffy towels. And I hate camping. Always have. Always will. Yet I managed this. Survived it. Enjoyed it. Loved it actually. People often ask me why I did it and on a simple level the answer is I was writing an MA thesis about it so it made sense to go there and see it and experience it for myself. On a deeper level I think I wanted to see could I do it. It wasn’t easy.

Skellig already had UNESCO World Heritage status when I worked there but no-one seemed to know or care apart from a few academics, historians, architects and archaeologists. I was researching the problem of how to manage a delicate site with high visitor volume. Little did I know what lay ahead. No one did. Now there is braying for limiting visitor numbers, restrictions on access but I disagree. You should go. Everyone should go. You won’t understand the profundity of the place until you do.

I often think of it these days when I see all this mindfulness/meditation/slowing down your life movement that dominates so much of modern living and discourse now. That’s exactly how we lived. Simply. Naturally. No distractions. Sleeping, waking, working, speaking, swimming, reading, eating, drinking, more reading, sleeping. That was the day. And it seemed longer for it. You noticed more. You paid attention to the weather, to the birds, to nature, to the sea. At night, aside from gas lanterns there was only the moon. You were aware of this too because when it was full you had more light. They were the nights you could climb the steep staircase to the monastery and wonder about those monks and what they were thinking. When the moon was a sliver in the sky you stayed down at your cabin.

Irish lights came too, to check on the lighthouse. Got to see that too. But when you live in a tiny cabin for four months at the bottom of the Skellig stairs the lighthouse suddenly seemed not only luxurious but spacious. And warm. Cosy even.

The puffins brought colour and humour and some very disappointed tourists who didn’t realise they weren’t resident on the island all summer. A bit like an Irish summer the puffin season is short.

There was so much to focus on, my MA thesis turned into a very large document. I wonder what has changed in the years since I lived there. Maybe I should go back, use updating my thesis as an excuse ! Or maybe I could be an extra in the next Star Wars movie…

Michelle Walshe is a writer from Dublin. She began writing in 2016 and her work has been published in The Irish Times in print and online, The Irish Examiner, The Gloss Magazine, Woman’s Way Magazine, The Sunday Independent, on Writing.ie and silverbirchpress.wordpress.com. In 2018, she won a bursary to the John Hewitt Summer School, was shortlisted in the Benedict Kiely Short Story competition, in the Iceland Writers Retreat, had a piece in a book, Teachers Who Write, An Anthology and ended the year by winning one of two bursaries awarded to carers at Greywood Arts. All her work can be found on her blog www.thesparklyshell.com. Follow her on Twitter @TheSparklyShell

“The Most Fantastic and Impossible Rock In The World” George Bernard Shaw, famed Irish writer, screenwriter and Nobel Prize Winner, visited the Skelligs in 1910. What follows is the letter from his astonishing self to Read more… 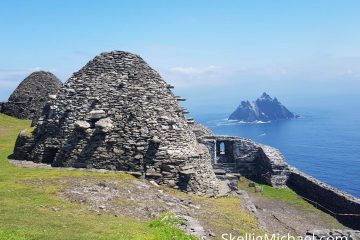 Skellig Michael In 3D? Very Cool… So, short of booking a Skellig Michael landing tour or booking a boat tour around the Skellig Islands, this might be the closest thing you can find to being Read more…