Ringing in The New Year in Portmagee – ‘The Old Year’

When I was growing up, most people only ever heard of Portmagee for one of two reasons:

Of course, since then, our football team, Skellig Rangers, have won the Junior Club Championship, Portmagee won Tourist Town of the year in 2012 and, as our visitors are fond of sharing on Instagram, we do have Ireland’s second best public toilet. So we’ve come up in the world.

Now that Skellig has gotten ever-so-slightly more well-known, it’s time to let the world know about this other very special aspect of our history. 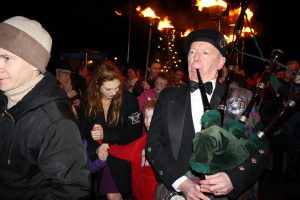 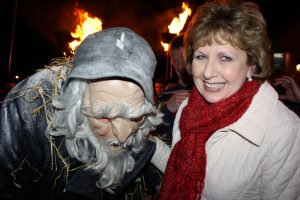 The Mysterious History of the Old Year

The year was 1727, three days after Christmas and a brig sailing out of Kinsale, under a French flag sought shelter from a raging Atlantic storm in the calmer waters of the channel between Valentia Island and the mainland village of Portmagee, or An Caladh, as it was known at the time. The ship was carrying sailors out of Nantes on their way to some unknown location further up the coast. Or so the story went when I was young.

There is, however, a competing history that contends that this was not some unfortunate ship full of innocent, hard-working mariners waylaid by the vagaries of winter weather. Instead, that the ship’s arrival in the harbour was entirely pre-meditated, to take advantage of what the area was principally famous for at the time: smuggling.

In fact, this alternative history requires the introduction of the man after whom the village was named: Captain Theobald Magee.

Magee had been an officer in King James’ army and, after the Battle of the Boyne, set himself up as a merchant mariner operating between Ireland, France and Portugal. He based his operation in An Caladh due to the area’s many advantages as a smuggler’s haven: the sheltered harbour, the many natural inlets and coves where contraband could be easily offloaded and, of course, its distance from the prying eyes of His Majesty’s Customs.

After having acquired considerable wealth and land, and the daughter of the local MP as a wife, Magee ended his days in a monastery in Lisbon, dying there in the year 1727. The year that you might recognise from earlier as being the setting of our story.

So, we have this alternative account which posits that this ship was in fact filled with salty dogs, transporting linens, tea and brandy from France to be offloaded to local partners-in-crime who would have been well-versed in the sale and distribution of black market goods to the greater populace beyond South Kerry.

Regardless of which is true, and we’re open to being corrected by any better-informed historians out there, what happened next – allowing for some creative license to fill in the blanks – is the genesis of the tradition we know today.

On New Year’s Night, the villagers were woken by the sound of drums and the drone of pipes coming from the nearby pier. They went outside to find the assembled crew of the ship, carrying torches, surrounding a feeble-looking ‘Old Man’, dressed in rags, who was wending his way shakily up the pier to the main street.

We can only imagine the locals were utterly confounded by this spectacle but were largely powerless to stop its unfolding.

The procession continued along the main street. The Old Man wobbled theatrically before dramatically falling over, only to be helped up by the crew. Once, twice, three times. Mirroring Christ’s walk towards Calvary.

Bare minutes later, at precisely 12 o’clock, a gunshot rang out in the night, the music fell silent and the Old Man fell over for the last time. He didn’t get up.

Putting ourselves in the shoes of the locals, they must have thought that some poor, unfortunate deck-hand had fallen foul of his surly French shipmates and had been summarily executed in front of them.

Suddenly, the music started up again, much livelier this time and a fresh-faced young man strode out of the darkness and met the assembled throng. He began shaking the hands of the village men and giving kisses to the local village women in celebration of the year that had just begun. Here was ‘The New Year’.

The sailors then explained that this was the New Year’s Eve tradition in their home town.

And this is what we commemorate every year since then for nigh on 300 years. 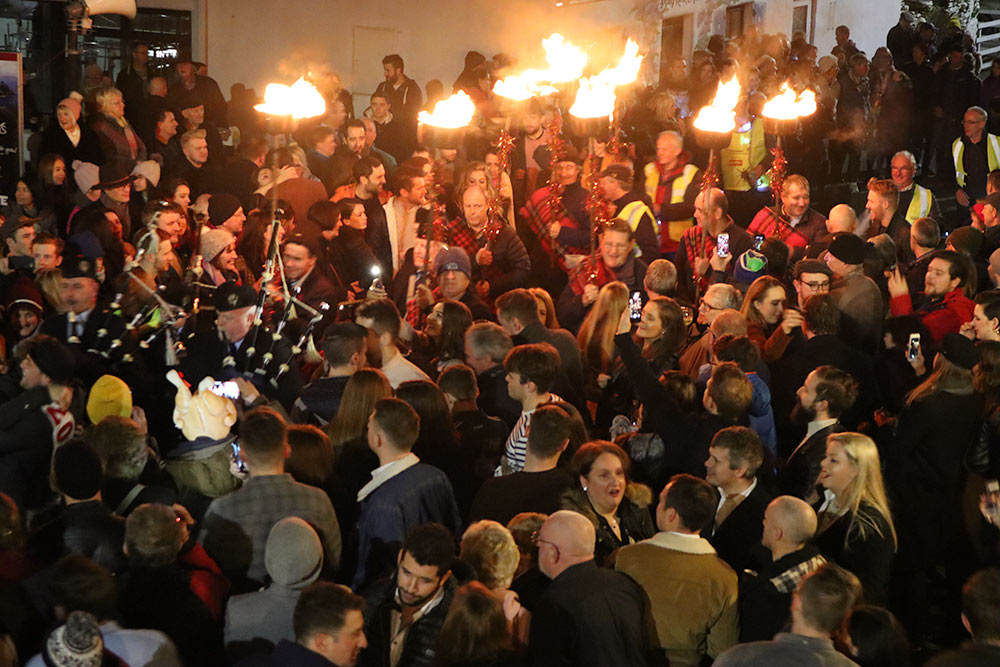 As a child, I have very vivid memories of the legendary John Devane, who played The Old Year for most of my life, getting into costume in the kitchen of the Bridge Bar where I grew up. And the whole enterprise was quite last minute and casual, though it still followed the traditional pattern strictly. But as we’ve come to recognise how special and precious this tradition is, the organic, slightly chaotic nature of the night has evolved into something significantly more organised.

In recent years, we’ve had some fantastic musical guests, including local pipe bands from Valentia and Kilorglin and even members of the New York Police Department’s Pipes and Drums Band and Ireland’s previous head of state, President Mary McAleese.

The person representing the New Year is now chosen by Committee or, in some years, via a collection for charity. And while the New Year has traditionally been a young man, we have had a number of women embody the role in recent times and, before that, quite a few men for whom the term “young” was very creatively interpreted.

It’s always a very special night, with a great atmosphere that stems from almost three centuries of community support and involvement. We’re still curious to know if anyone in any other part of the world has a similar tradition or had this tradition in the past and lost it. If you know anything, please get in touch.